Charlie is on the Left

A few weeks ago I was walking and came across a squirrel that had been hit by an automobile. He still had a leaf in his mouth. I searched for some sticks, and lifted him up off the road so that he would not be totally squished by oncoming traffic. As I placed his remains by the side of the road, a man stopped and looked at me and said, “Thank you.”

Only two days ago, during my walk on Highland, I came across a beautiful turtle that had been run over by a less-than-alert driver. He was not moving. I gently picked him up, and placed him by the side of the road. Was he only stunned? On my way back, I checked to see if he had moved. His little life was gone.  I wanted to plan a funeral for him, but I didn’t.

Today, a neighbor brought the collar of our precious Charlie to me.

Earlier, Charlie had escaped from the yard. I screamed as he ran down the street, but his adrenaline was pumping and he did not hear me.   I, and neighbors, looked for him for hours. They kept saying he was going to come home. But he never did. 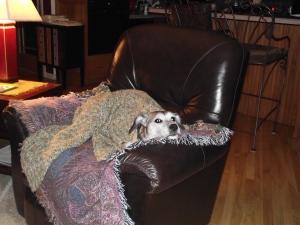 Charlie is wrapped up and sleeping

A neighbor found him laying by the side of the road only three houses away. Was he coming home? Had he been hit by a car? He had grass in his mouth? There was no blood anywhere. My neighbor offered to bring him back home in his golf cart. We wrapped him in a white towel. A passerby helped lift him into the cart. I wrapped him in another towel and hoped for him to start breathing. My neighbor carried him to our house and placed him on a bench. Every few minutes I went out to see if he had come back to life.

Charlie was an unusual Jack Russel, who at 16.5 years, looked like a dog half his age. Our Vet said he had a good five years left in him. But Charlie could barely hear and his eyes were dimming. His nose kept him on the right path. 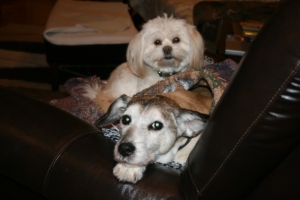 When Charlie came into our lives, he was timid and shy. Maxi (our deceased Schnauzer)  taught him to bark, and he learned that he could rule all of us. Soon, he was tearing apart all of Maxi’s toys. Maxi went into deep depression for almost a year. But soon they were brothers, sleeping and barking together.

Charlie was more human than dog. He talked to us about everything. He would sit in front of me and complain when Tom was working in

another country. He had an opinion about the heat, the cold, the weather and only liked to stay outside when it was warm. When the alarm for the dryer would go off, he would sit in front of it, asking for a hot towel. He usually got one. He liked his food softened with water and fought over treats with Twinkers (our Maltese mix and his sister). He would let her steal his treat and then bark at her. He watched television with Tom, and was always interested in the story. Charlie gave us so much attention–almost every waking minute. He did not like to be alone.  I can’t imagine living without him!

Charlie was shy with other people.  He did not want to meet them if we were around.  If guests

came to the house he would keep circling them until they left.  He barked at everything that moved, and taught Twinkers how to do the same thing.  It is a tradition, I guess.

But Charlie liked to run. He was so naive. He thought life outside the house was just as safe as inside.   He escaped probably 4-5 times a year and generally ran the same route, down to the dam at the lake. Once, when we lived at Shoal Creek, he ran out into four lanes of traffic and survived. He also ran down a hill across four lanes of traffic, and found friends at a huge apartment complex. (He liked people when we weren’t around.  He took his job of protecting us seriously.) He was a runner but when we approached him, he would always come to us. Today, Charlie ran for the last time.

There is a great emptiness in our hearts … and our lives, and we will never forget how much love he gave to us. 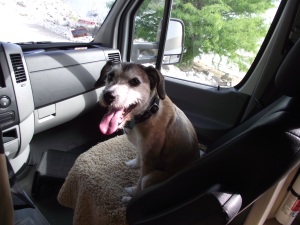 Charlie sitting in the front seat of our old motorhome!

We just purchased a new motorhome with Charlie in mind.  We knew he would need space to run, and now he will never experience that space we chose for him.

Goodbye Charlie, we loved you!

As always, this post is copyrighted by Marla J. Selvidge.